In our local community, as is common in many historical circles, women are typically relegated to three major historical roles:

I have studied a great deal of international history, much while living and working abroad. I wear my nerd badge with pride. When I was growing up, American history bored me. In school, female historical figures or civil rights leaders were never more than a week long project or chapter at most, and teachers combined all the women or civil rights activists in one go. Weeks could be spent on each dead white man. In undergraduate Russian history classes at The Evergreen State College, we learned about the impact of authors’ biases on historical narratives. We studied the history that was always a mystery to me growing up on US military bases in the Cold War: what was on the other side of the Iron Curtain. We learned about poets Anna Akhmatova and Marina Tsvetaeva, closeted composers (which would have been great to learn about in the classroom, that there was a term for what I am, bisexual, and that there were others like me), and black poets leaving the “land of the free” for ironically greater creative freedom (to a point) in the totalitarian USSR. While enrolled in a class about Western Writers’ Perspectives on Central Asia at the UW Seattle campus in grad school, that’s when I learned about Anna Louise Strong, a radical journalist who lived in Seattle and traveled to the Soviet Union shortly after the Revolution. I didn’t learn about her when studying journalism under male professors or in Pacific Northwest History classes: a professor from Uzbekistan brought her to my attention. In my international studies classes, we had syllabi that included women authors, books with women as the main characters. This inclusion mattered, and it made other cultures seem more accessible than my own. These were historical and cultural classes taught by women, experts who understood complete historical and cultural narratives don’t exclude more than half the population.

Unfortunately, that is exactly what many local historical events and organizations do. There are several writers and historians from underrepresented populations in our community that city staff should be actively taking steps to connect with, but many of us don’t feel comfortable participating in the historical societies that city officials look to first for experts. When individuals from underrepresented populations do show up, we find events led by white men, who primarily talk about dead white men. When women are discussed, it’s in the context of being the wives of the dead white men, or women greeting returning soldiers on docks. One local “historian,” who hosts Drunk History talks, only references women in his history talks when they’re prostitutes or victims of horrific crimes/ accidents. While the City of Tacoma’s Historic Preservation staff states they cannot support alcohol themed events, they are sponsoring this speaker’s upcoming “Happy Hour” at a bar as a fundraiser for the Knights of Pythias (a predominately white male organization that only allows male members who are voted in). The very definition of Happy Hour is the time of day during which bars reduce the price of alcoholic drinks. What is more problematic is giving the spotlight to someone with a history of disregarding women’s contributions: both those of historical figures, and when we work with him on projects.

White men have a very bad habit of acting as gatekeepers. We see it in politics, companies, galleries, museums, and social organizations. Historical societies are no exception. Over the years, I’ve met many white men who do historical research as a hobby, who have not been trained to understand the impact of biases on narratives. I have met guys who think putting on an outfit that resembles soldiers in the 1800s or medieval peasants makes them experts on the eras. As a previously self-proclaimed “cool chick,” I tried to participate. I’ve had my ass grabbed in the SCA and medieval fairs. I’ve let sexist jokes go in the clubroom at the Knights of Pythias Temple because it is a literal boys’ club. (There is a Pythian Sisters auxiliary, which I had joined in order to help with outreach and diversification efforts.) I’ve noticed that women are often only granted harassment free access to these kinds of environments when they’re the “property” of a male in the group. While the drunk historian was romantically pursuing me, I was encouraged to participate in archival activities at Tacoma’s Knights of Pythias Temple. I was asked to edit articles, Drunk History scripts, and help with design work (i.e. do the actual layout on the Powerpoint presentations). But once he had decided to move on, my participation in the Temple’s March 2019 archiving activities was no longer allowed. At first, he stated it was because he asked the two other men in the group if I was wanted there and “they said no”. One of the men cited by the historian confirmed after the fact that he was never asked, and if he had been, I would have been welcomed. Later, the historian changed his story to my participation not being welcomed “because women aren’t allowed to see the Knights’ artifacts.” I was not given credit on presentations I had helped with; this honestly is probably for the best due to all the inappropriate comments he improvised. I stopped attending his presentations after a really insulting one in October, during which a friend privately messaged me she “wanted to but would not throat punch him”, and I last acted as designated driver/ post-presentation “wrangler of the drunk” in January 2019, after he fell off a bar stool at the venue and smashed a full pint glass of beer on his face. (This was witnessed by a member of the Knights.) Privately, I encouraged him to seek help and was willing to try to preserve our friendship or at least our ability to collaborate, but because the historian/ Temple’s keyholder was no longer interested in me romantically, I no longer had value whatsoever. Not as a friend, but more importantly, not as a trained researcher/ writer. The kind of experience that agencies and institutions look at when determining whether to fund future projects was practically erased because it was not credited to begin with, and he cannot be counted on to give an objective answer about my work. Meanwhile, he continues to benefit from this work. His reputation was not impacted by his behavior; he is just a “good guy” trying to get women involved in the organization. As the Knights of Pythias’ May 24, 2019 Facebook post demonstrates, this participation is appreciated most when it comes in the form of Burlesque dancers posing for photo shoots in the club room.

I first wrote about my experience on Facebook. While it was reassuring to know I’m not the only one with these concerns, it is frustrating to know that we’re still dealing with this misogyny in 2019. Some organizations such as the Tacoma Historical Society are trying to address sexism within historical research by hosting a Women of Tacoma exhibit. Given the organization’s overall history of exhibits and presentations, this effort reads like the aforementioned one-off chapter on women in a classroom, but I hope it’s a sign to come of better integration and inclusion of narratives. At the city level, I would love to see an incubator for women, people of color, LGBTQIA+, and immigrant researchers. We also need more Native/ indigenous histories presented by Native/ indigenous researchers. There are enough “Native American histories” written by white males out there already.

Institutional/ governmental leaders and the “good guys” in these organizations need to stop engaging in, rewarding, and ignoring bad behavior. It creates barriers to participation for women when we: don’t feel safe/ are only granted access when someone is interested in us/ are only used as two-dimensional visual props. Organizations which discriminate based on gender have no business receiving public funding.

Follow No, Mine! Studios on WordPress.com
Join 400 other followers

Tim Kapler (@timkapler) just sent me this picture he took last year of a dragon testing the first dino game demo at the City of Tacoma Arts at the Armory event.
The morning of Screenshot Saturday was spent working on an application for a women's convention that bars children from the venue during setup/ teardown. So, while that's obviously a no-go, at least now I have a cool graphic for other event applications?
Happy Triceratops Tuesday! Here's a look at how the "Rawrmory" is progressing. 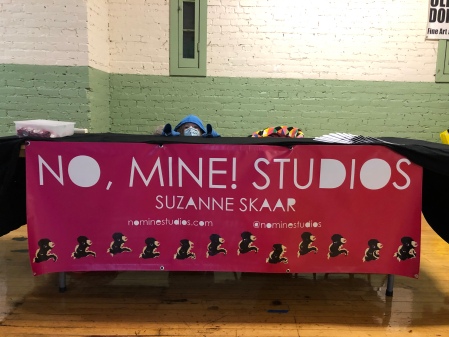 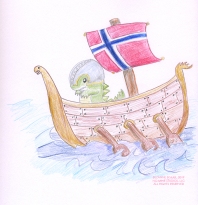